My favorite pair of sunglasses ever were a pair of Killer Loop Pandemoniums. They fit perfectly, they looked good, they were light and comfortable. So of course I lost them. Now, at the same time, the first Matrix movie had come out, and the Killer Loops were similar to the Blinde Neo (which they were inexplicably not selling). Killer Loop, having designed a pair of sunglasses I liked, promptly stopped producing them (bonus: their website’s USA page doesn’t work). Which is sad, since Bausch and Lomb at one point called them out in their 10-K (“The Killer Loop Pandemonium sunglasses combine a contemporary new style with a bold attitude and youth relevant advertising to drive worldwide expansion. “). Which makes me a little embarrassed that I liked them so much. (More embarrassing: “Intended to be worn to the limit, this sleek line of eyewear was designed for extreme sports — snow boarding, in-line skating, mountain biking and surfing.”)

The Blindes from the movie, when you could find them, were listed at $250. I bought a pair on clearance for ~$50 on Overstock, and one of the lenses popped out in a few days (woo-hoo!) and couldn’t be repaired. 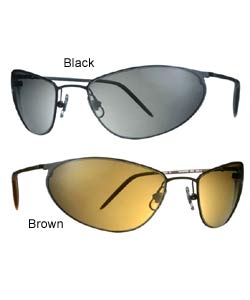 From the now-sold-out Overstock.com page.

And so, down two moderately-expensive pairs, I descended into the world of knock-off sunglasses. It is, as you’d guess, a lot easier to find knockoffs of the movie sunglasses than my favorite Killer Loops. It’s also a lot harder, though.

Here’s a site (“Matrix Eyewear”) which uses Matrix trademarks pretty shamelessly and has what appear to be a fairly high-quality, looks-like-the-real-thing pair for $38 (of course they’re sold out). Or the pretty-good $27 knock-offs. 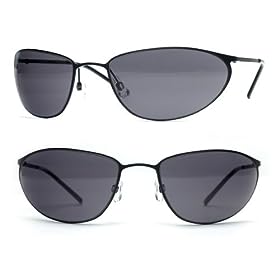 Then there’s a strain of knock-offs which don’t look like the Blinde but are sold as a knock-off:

The big difference is that there aren’t any lens rims — the arms and nose bridge are both essentially bolted into the lenses themselves. They’re horribly constructed, and once you recognize them, you’ll see them everywhere. I bought a pair for $5 and promptly destroyed them through a few hours of wearing.

These absolutely dominate the eBay listings, though, as “Matrix sunglasses” and sell for $7 + a ton of shipping.

Ah — here’s an image from one of the auctions that shows off how they’re built.

That’s pretty awful. Compare them to the original, and it’s pretty obvious that they’re not even really copy cats: they were probably a design they were stamping out and the wholesaler thought “hey, they’ve got oval lenses, the Blindes have oval lenses…”

The market is flooded with those horrible, super-cheap glasses that don’t even look like the real thing, for prices of $5 (where they’re plentiful) to $25 and up (where they’re apparently so hot they can’t be kept in stock). Meanwhile, though there’s clearly a continuing market for these kind of knock-off shades, it’s quite hard to find any that actually look like the Blindes — though some exist, if you dig through ebay listings, and they’re just as cheap.

It’s a really interesting economic problem: if you can produce knock-off sunglasses for so little that they’re extremely profitable to sell at $5, why do the horrible-looking pairs survive against the reasonable facsimiles? And did Killer Loop get out of the market entirely? Is there somewhere a single Chinese manufacturer that happened to be putting those horrible ones out that lucked into a 10-year knock-off market niche as wholesalers passed them off as “Matrix” glasses?

In current order of time spent, I'm a Product Manager at large, followed distantly by biking, reading, and writing. My last truly cool trip was to South Africa, which I highly recommend.